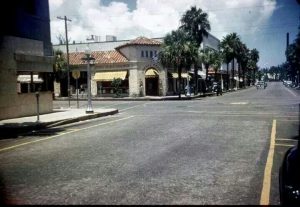 In 1972, the citizens of Fort Pierce voted by referendum to create Fort Pierce Utilities Authority (FPUA).  By City Charter, FPUA is governed by an independent board, consisting of five members.  Four members are appointed by the Fort Pierce City Commission with four-year overlapping terms.  The fifth member is the Mayor of Fort Pierce.

Enjoy reading a little bit of history for each utility service FPUA provides.

In 1911, the City of Fort Pierce held an election in which the citizens approved the issuance of $80,000 in bonds including $15,000 for an “electric light plant.” The electric plant was put into service shortly thereafter and operated from 5 – 11 pm daily, plus a couple of mornings each week. 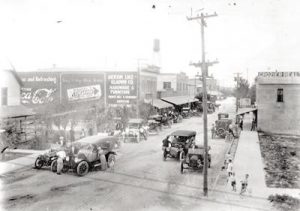 The original generator was a small unit driven by a steam engine and a boiler which used wood fuel. Electric rates were established in 1912 at 15 cents per kilowatt hour (kWh). Over the years the Power Plant grew from a few customers to approximately 25,000 customers. Demand on the system has increased from 75,000 kWh per year to 605,000,000 kWh per year.

The HD King plant was decommissioned in 2008 when FMPA’s Treasure Coast Energy Center (TCEC) came online. TCEC is a 300MW combined-cycle natural gas-fired plant located off of Selvitz Road in Fort Pierce and is operated and maintained by a staff of 15 FPUA employees. Since its commissioning, TCEC has achieved numerous accolades for being one of the most efficient and environmentally friendly power generation plants in the nation.

In 2018, FPUA sign an agreement with FMPA to purchase renewable power from 2 different Solar Farms located in Florida. The first Solar Farm came online in June of 2020 and provided FPUA with 2MW of power. FPUA’s own facilities will be the recipients of this renewable resource. The second Solar Farm is scheduled to come online in 2023 with FPUA taking an additional 1MW. In 2019, the FPUA Board voted to expand its purchase of solar energy and signed an agreement with FMPA to take an additional 15MW of Solar Energy from two additional Solar Farms being built in Florida. Their scheduled operation date is 2023. 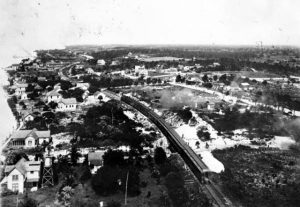 The Power Plant was financed by a bond approved at an election on DECEMBER 5, 1911. The entire Electric Light System including the plant, poles, wiring, and street lights cost $14,640.

At the regular meeting of the City Council on OCTOBER 2, 1912, the following rates for electricity were approved: $1.50 per month minimum, 15¢ per kWh and 25¢ rent on each meter per year.

Electricity came to Fort Pierce on THANKSGIVING DAY IN 1912 when the engines at the Power Plant were started at about 7 pm.

In the early years, the generator ran from 5 – 11 pm, plus two mornings each week so “ladies” could do their ironing in the morning hours. 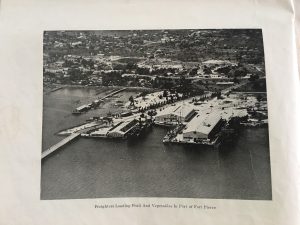 On NOVEMBER 6, 1912 the City Council approved the purchase of a tank car of fuel oil from Standard Oil at a cost of $1.35 per barrel.

This action was later rescinded by the City Council on NOVEMBER 18, 1913.
On JUNE 3, 1914, the City Council instructed the Board of Public Works to keep the street lights burning all night.

A blackout occurred one evening in 1922 when a wad of Hyacinths floated down Moores Creek, blocking water intakes at the Power Plant.

On JUNE 19, 1963 a giant sea bass was caught near the Power Plant water intake chamber after it began to interfere with the normal flow of water.  The fish was four feet long and was estimated to weigh between 80 and 100 pounds.

Power Plant workers believed the fish had entered the chamber when it was very young, since holes in the intake screen were only one and a half inches in diameter.

In OCTOBER 1963, after 50 years of operating without a name, the Power Plant was officially named the Henry D. King Generating Station after former superintendent King.  Tradition dictated that the units all be given nicknames (usually for employees, engineers or service crew members). Some of those nicknames were: Oswald, Little Pat, Jo Berg, Ole Phil, and Henry K. 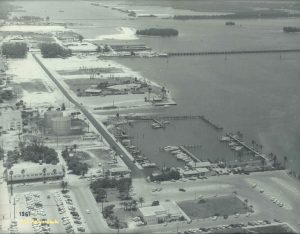 The second generating unit used at the Power Plant was eventually sold to a man from Miami named Captain Tom. He owned a limestone crushing plant, and after hooking up the 100kW unit, he told the Miami Electric Company to lower his rates or he would produce his own power. They did lower his rates (he was their biggest customer).

The Power Plant used to blink the street lights as an emergency signal to police to report to the station.

In 1917, the City’s first drinking water supply came from an 800-foot deep artesian well located in an area near the now decommissioned, King Power Plant, supplying about 275,000 gallons per day.

The first “plant” to serve the better part of Ft. Pierce was built in 1927 at the present-day city compound on Savanna Road. This plant is no longer in service, but some of the structures are still standing. Previous to 1927, a water plant was started in the downtown Fort Pierce area, but during construction the walls collapsed, prompting a new endeavor at the Savannas. 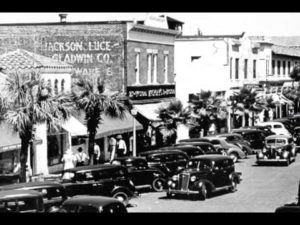 The Savanna swamp area served as the water supply, but during the drought of 1939,

the water level in the Savannas declined to a point below the suction of the intake pumps. Fortunately, six wells had just been constructed around the Savanna plant. Those wells were used for two years before water levels returned to normal in the Savannas. A canal was then built to the City compound linking the Virginia Avenue Canal out to Five Mile Creek at Okeechobee Road (near Walmart) to augment the Savanna supply. During dry periods flashboards were installed at Five Mile Creek in order to divert water to the City compound via the canal system.

In 1959, a 1 MG storage tank was built at the present Water Treatment Plant site on S. 25th Street. At night the tank was filled and during the day water was pumped to the City. During the drought of 1962, Five Mile Creek dried up. Shortly thereafter, the Belcher Canal was completed and a 60″ sluice gate, located at 41st Street allowed water stored in the

Belcher Canal to flow to Five Mile Creek. However, water draining from the un-sewered populated areas south of the Belcher Canal resulted in high fecal bacteria counts in the water flowing to Five Mile Creek and eventually to the Savannas. As such, it was determined that the future water supply should be from wells drilled to a depth of 100′ to 125′ beneath the land surface.

In 1963 a series of wells were drilled along 25th Street. These wells were also pumped into the existing 25th Street 1 MG storage tank and then this water was pumped to the system. At the same time, a new Water Treatment Plant (WTP) was being constructed at the tank site, on 25th Street, and was completed in 1964.

The plant on 25th Street employs Lime Softening (LS) to remove dissolved minerals from the well water. The plant is served by 42 shallow aquifer wells and was built to treat up to 20 million gallons per day (MGD), making it the largest water plant in the four-county area at the time (St. Lucie, Indian River, Martin, Okeechobee). However, the shallow aquifer is subject to periods of drought and also contamination. It has also been determined, from hydrological studies, that the shallow aquifer cannot supply more than 11 to 12 MGD of water on a continuous basis. With that in mind, FPUA decided that another source of water would be needed to adequately supply future needs.

Beneath the shallow aquifer and beginning at a depth of approximately 800 feet is a deeper aquifer. This aquifer is called the Floridan Aquifer and is the same one that supplied the City its’ water back in 1917. Separating the two aquifers is a layer of clay between 300-400′ thick. A total of eleven new wells have been drilled into the top of the Floridan Aquifer to supply drinking water.

The water quality of the Floridan Aquifer is different than the shallow aquifer in that it has a high concentration of chlorides. In order to remove the chlorides, a new technology called “Reverse Osmosis” (RO) was needed. During December 2002, construction of a 5.3 MGD RO plant was completed next to the existing LS plant and placed into service. Over the next five years, the RO plant was expanded to its present capacity of 10.3 MGD. Water from the RO plant is blended with the water from the LS plant. By permit, a total of up to 23.35 MGD of treated water can be pumped from the combined plants to the drinking water distribution system. 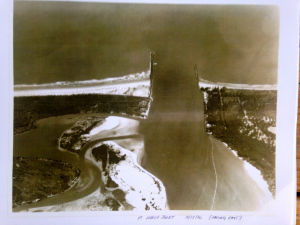 The current configuration of the Island Water Reclamation Facility (IWRF) was completed in 1986 and was upgraded with a deep injection well system in 1993. The plant treats an average 4.5 million gallons of wastewater per day and has an FDEP permitted capacity of 10 million gallons per day. The plant discharges all treated effluent wastewater into a 3,300 feet deep injection well.

In 2019, the IWRF received another upgrade with the addition of a 2000 kW generator to keep the treatment and pumping equipment running if power to the plant should be disrupted, especially during and after storm-related power outages. 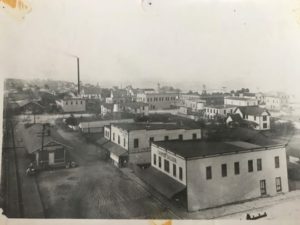 This emergency generator power reduces the risk of any wastewater discharge into the Indian River Lagoon.

FPUA’s largest Lift station, Lift Station A, was constructed in 1995 and has three 245 horsepower pumps that are capable of pumping 8,000 gallons of wastewater a minute from the mainland to the Water Reclamation Facility, located on Hutchinson Island.

In the early 1990’s, after the Florida Clean Air Act was enacted, FPUA began using compressed natural gas (CNG) as vehicle fuel. In mid-2020, the FPUA fleet boasted 17 vehicles using CNG as one of their fuels. In addition, the local Community Transit Authority has 13 buses and vans that use CNG as their second fuel, and in 2012, Waste Pro added their own CNG fill Station, having over 80 dedicated CNG garbage trucks in their 2020 fleet.

Our Mission Statement drives our values: “To provide our customers with economical, reliable and friendly service in a continuous effort to enhance the quality of life in our community.”Our Values Include:

By focusing on these values, we are able to meet our customers’ expectations, operate with integrity, provide reliable and prompt service and to maintain the lowest price possible for all services.